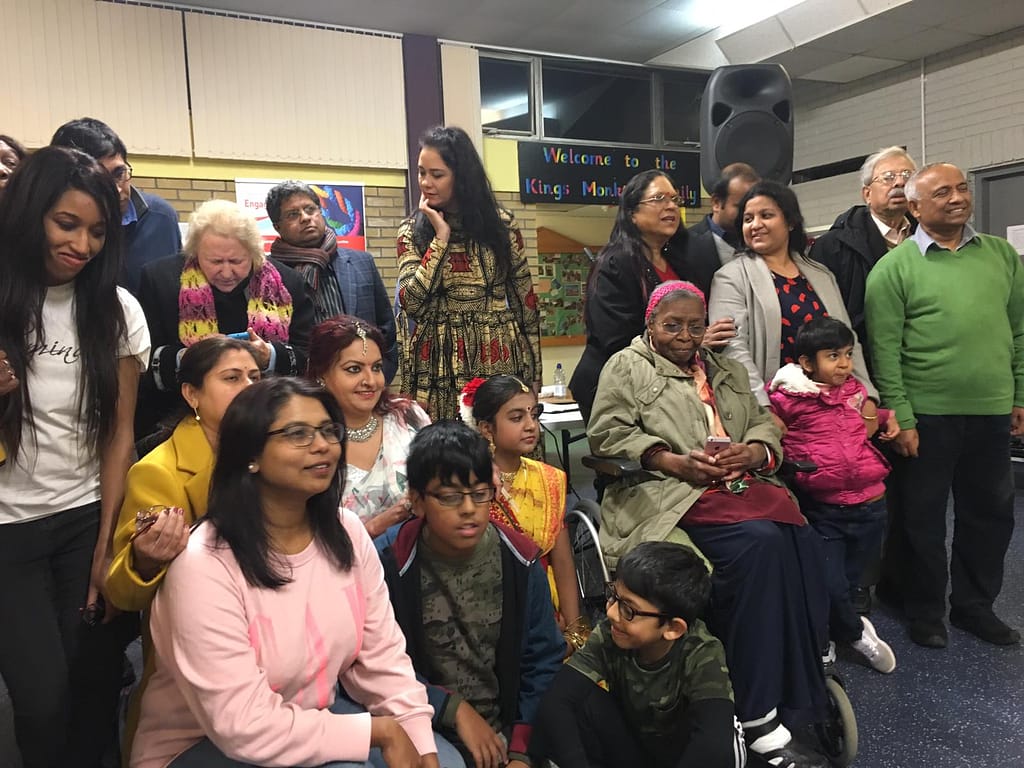 Approximately 65 people, including artists, art enthusiasts and audience, have participated in the programme. The participants were from Cardiff, Swansea, Camarthen, Bristol, Swindon, Leicester and Glouster and represented diverse communities and different age groups.

KIRAN, the Knowledge-based Intercommunity Relationship and Awareness Network, has organised a programme called ‘KAVIGAN – An indo-Cymru Heritage Crossover’. Several artists and musicians from Cardiff and other parts of the UK have performed as part of the programme. The event was planned with the view of promoting community inclusion. It benefitted local communities in the following ways:

1. People were engaged through Heritage

It offered the opportunity to learn about Indian, Bengali and Welsh Heritage, Art and Culture. The event created an opportunity for community members to learn about each others’ traditions and legacies through active participation. This enjoyable and educational event included the following aspects of Indian and Welsh heritage:

Mrs Indira Ray, an eminent singer from Swindon, sang the Bengali song ‘Ami Chini go chini tomare’. This is a folk song, written by the famous Nobel laureate Rabindranath Tagore. Mrs Ray also sang the English rendition of the song, ‘I know you, I know you, o Madam of Distant Land’. This musical performance was accompanied by the Tabla (which is an Indian percussion instrument) played by Anirban Mukhopadhyay. The Award-winning Pianist Miss Ify Iwobi and her Band played Welsh music to accompany the song. The song was a unique artistic fusion between the folk and classical music of West Bengal and India on the one hand and Welsh Music on the other.

Dr Sudiptamohon Mukhopadhyay from Cardiff sang a Bengali song which was written and composed by Lalon. Lalon was a poet and spiritual songwriter of West Bengal who spread the philosophy of humanity through his songs and music. Dr Mukhopadhyay also discussed the significance of Lalon’s philosophy, i.e., working for the common good.

Dr Madhushree Ghosh and Miss Oishee Ghosh from Leicester sang another Tagore song with an English rendition “Fule Fule Dhole Dhole”. The song was accompanied by Miss Ify Iwobi on Piano and her band and Anirban Mukhopadhyay on the Tabla. It was an enjoyable performance with artists from across the UK, joining together to create magic. The duo represented a Bengali cultural group in Leicester, Bong Beats.

Miss Ishita Ray, a brilliant dancer from Bristol, performed a dance based on the folk genre of West Bengal and India. She supported community cohesion and peaceful living through her brilliant performance.

Mrs Atreyi Majumder, an educationist and former professor of Economics of Delhi University, recited a poem written by the famous Nobel Laureate Rabindranath Tagore.  She reiterated the importance of community inclusion and tolerance through her performance.

Mrs Sk Jasmine from Cardiff gave a wonderful performance by reciting a famous poem ‘Banalata Sen’, which was written by the famous Bengali poet Jibanananda Das.

i) Music and Songs

One of the biggest attractions of the function was the award-winning Welsh Artist and musician Miss Ify Iwobi and her band. Miss Iwobi was incredible on the piano, performing some of her own compositions. The audience enjoyed an hour-long performance which captivated the audience with Welsh tunes and music. The singers and musicians in the band were outstanding with their performances.

Dominica Rau, an accomplished performing artist from Cardiff, performed a contemporary dance. She highlighted the importance of peace and tolerance through her amazing performance.

Ms Ruby Ferrel from Cardiff recited a poem she wrote. Ms Farrel, who is a social activist and author, wrote the poem 25 years ago. The poem signified the essence of community spirit and togetherness.

Thus the programme created a common platform for members from diverse communities to participate actively and make connections. It highlighted the importance of diversity in our local communities.

2. People were inspired to participate in the Arts and artistic activities

The programme raised awareness about the positive effects of art and artistic activities. It inspired community members to take part in cultural activities. People can make connections in local communities through different forms of art. KIRAN has asked performers to run a few workshops in Cardiff which would allow community members, who have limited exposure to art activities, to take part through music, dance, recitation and drama.

3. People had an opportunity to connect

This programme has given people a chance to make new friends and connections. About 65 people including artists and art enthusiasts have taken part in the programme. They include people from Indian, Bangladeshi, White British, Somalian, African and European backgrounds. The participants of the programme came from Cardiff, Swansea, Camarthen, Bristol, Swindon, Glouster, Leister and Kolkata. People from such diverse cultures and backgrounds have made lasting connections and enriched each other through positive interactions.

4. The programme increased the confidence of community members

The programme encouraged participation from children, adults and the elderly alike. It allowed professional artists and art enthusiasts to participate actively through arts and culture. It also encouraged people who have never taken part in any art activities in public to perform and earn appreciation from the audience. It has provided people with increased confidence and better integrated them into communities.

5. The programme helped the community feeling

At the end of the programme, people enjoyed complimentary food supplied by KIRAN. As always, KIRAN purchased the food from a local supplier in order to benefit local businesses.

KAVIGAN was a successful programme and an achievement on the part of KIRAN. It was liked by all artists and participants alike. People were happily engaged through art, culture and heritage and expressed their interests to be part of this kind of programmes in the future.

Mrs Uzo Iwobi OBE, Specialist Adviser on Equalities at the Welsh Government, kindly attended the programme and represented Ms Jane Hutt AM Chief Whip and Deputy Minister. Mrs Iwobi, in her speech, highlighted the importance of programmes like KAVIGAN and praised KIRAN for its hard work and contribution towards improving community wellbeing.

Mr Raj K Aggarwal OBE DL, Honorary Consul of India in Wales, was also gracefully present in the function. Mr Aggarwal reiterated the importance of community inclusion and in his inspirational speech supported KIRAN in its journey towards communities which are connected, engaged and resilient to hate and social exclusion.

The function was attended by 65 people from different parts of the UK, including Cardiff, Swansea, Camarthen, Bristol, Swindon, Leicester and Glouster. The members of the communities artists and art enthusiasts alike were actively engaged through Art, Culture and Heritage. Even though, those who have not performed on the day, have actively participated in the planning, supporting and back-stage activities. The function was highly appreciated by the people and there is a huge expectation among the community members to participate in similar programmes in future.

The programme lasted for 4 hours between 1 pm to 5 pm. AT the end of the programme people took part in community dining followed by community dance and merriment. There was a feeling of happiness and people felt connected. KIRAN is going to organise similar programmes in 2020. Please contact us if you want to tale part in any of our programmes and make new friends through art, culture and heritage.

6. The following artists participated in the KAVIGAN:

Indo-Cymru Student Conference – Beyond the Boundaries 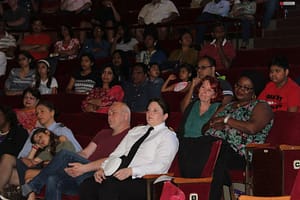 KIRAN Diversity Day – Celebrating the pride of our communities 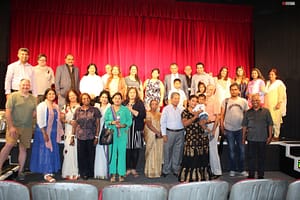 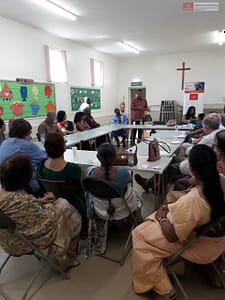 KIRAN Community Dining – The Magic of having Food together 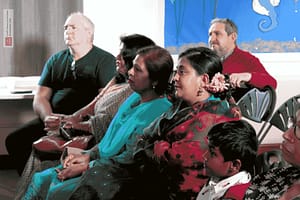 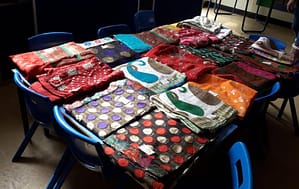 KIRAN Saree Day – 5 facts about Saree you might not know

This site has been developed by Anirban Mukhopadhyay